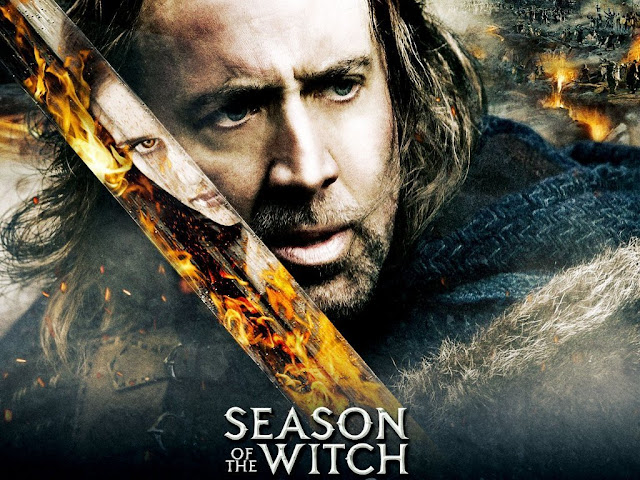 Mid-way through watching Season of the Witch, I heard snores coming from a fellow movie reviewer. Based on what appeared on-screen, and the audience members’ reactions, my slumbering colleague was one of the lucky ones.

Starring Nicolas Cage and Ron Perlman as 14th Century crusaders tasked with escorting a suspected witch to a mysterious abbey, it’s a medieval thriller without any thrills or knowledge of medieval history or culture. Get the movie at 123Movies.

Behmen (Cage) and Felton (Perlman) are sick of fighting for God and glory in the Crusades (lots of sub-par Zack Snyder imitation here). When an atrocity causes Behmen to lose his faith and resolve, the two return home to find Europe devastated by the Black Death.

According to the dying Cardinal Ambroise (Christopher Lee), the plague is fueled not by infected rats, but sorcery. The Church has captured an alleged witch (Claire Foy) who is believed to have spread the virus. Behmen and Felton must join the dogmatic monk Debelzaq (Stephen Campbell Moore), a grieving knight (Ulrich Thomsen) and a headstrong lad (Robert Sheehan) to take the witch to a remote monastery where she will stand trial. Behmen wants to ensure she receives a fair trial while Debelzaq believes she’s guilty and must be put to death. But in a land where paranoia and superstition have replaced rational thought, where does the truth lie?

Director Dominic Sena (Gone in Sixty Seconds) clearly wants to make a medieval horror-thriller with nods towards The Exorcist and Umberto Eco’s The Name of the Rose, while beating the similarly-themed Black Death to the box office. The problem is neither Sena nor scripter Bragi F. Schut bothered to research their subject. Anyone who knows medieval history will be annoyed at the film’s inaccuracies – just one tidbit: the Crusades were done by the 14th Century, except for a couple of expeditions against Muslim-held Alexandria and North African pirates.

Another weakness is that the filmmakers don’t even know their Biblical horror. Classic movies like The Omen and The Exorcist understood that if you bring the Devil into a film, you need God’s presence to balance it out . . . or at least establish the rules for evil. How the ultimate villain can happily traipse through a consecrated monastery and still be hurt by holy water is never really explained. The sub-par CGI doesn’t help: when the big, bad villain is finally revealed, it’s more hilarious than scary due to the cheap graphics.

The cast delivers the laughably ‘medieval’ dialogue in SoCal accents, and with frequent anachronistic lines like “I’ve saved your ass many times.” Cage needs to get someone else to vet his scripts – for every gem like Kick-Ass, he’s appeared in countless duds like Wicker Man or Astro Boy. Even Perlman – usually so much fun in films like Hellboy – is strangely muted in this flick. Only Claire Foy gets out of this with any kind of dignity: she deftly plays pitiful or menacing, depending on the needs of the script. She clearly deserves better than this dreck.

Let’s just say there’s a very good reason why Season of the Witch was released during the January dump period. With its wooden acting, cheap CGI, sieve-like script and complete inability to understand the rules of its genre, the movie gets a 1/5.

You should visit this site: free sab result